Fork me on GitHub

I’ve recently been playing around with Vagrant to allow Nancy contributors to easily test their changes on Mono, even if they don’t have much (or any) experience with Linux or Mono itself (more on this soon). Vagrant allows scripts to be created to quickly and easily spin up virtuals with a certain configuration, and just as easily tear them down and destroy them when you’re done (which is just as important if you’re using a machine with limited SSD space).

Vagrant sits on top of actual Virtualisation software such as VirtualBox or VMWare (but no Hyper-V support), but it defaults to VirtualBox, and that’s the only provider out there that doesn’t involve spending money as both VMWare, and the Vagrant plugin for it, are commercial.

Vagrant installed fine, VirtualBox installed fine, everything appeared to be working and could spin up VMs just dandy, but when I rebooted the machine I was stuck with the “spinning dots of doom”, and the only way to get the computer back was restoring from system restore and ditching VirtualBox

I tried 3 different machines, two failed the same way and the third worked fine; the only difference being the working machine didn’t have Hyper-V enabled in Win8, but I couldn’t remove it from the other two as it’s required for Windows Phone 8 development, and I use it for several other virtuals as the performance is excellent. Stuck between a rock and a hard place

After trying multiple old versions of VirtualBox, and blind alleys that suggested disabling the hypervisor on startup would fix it (it didn’t), I finally tracked down the problem to be the networking drivers it installs. VirtualBox has three networking modes: NAT (the default), Bridged and HostOnly – with the latter two requiring separate drivers. Unchecking both sets of drivers in the installer and everything works fine: 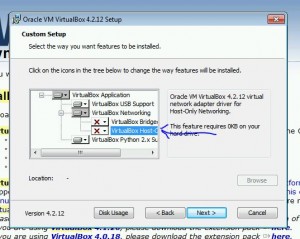 Vagrant uses NAT by default anyway, and that gives you internet access from the VMs, so there shouldn’t be too many situations where you need to use the other two options anyway. It even works side-by-side with Hyper-V too, so I can have my normal Hyper-V virtuals running while firing up Vagrant scripts on VirtualBox. It’s obviously a bit slower this way, as it can’t use it’s own HyperVisor, but it seems fast enough, and less hassle than having to disable Hyper-V and reboot every time I wanted to use Vagrant (or vice versa when I wanted to use Hyper-V).

Now, back to those Nancy scripts..